But honestly Teacher, it was my idea.

I didn’t even have to open the curtains at 7am to know that the sun was splitting the rocks in that wonderful way that suggests that today was going to be a scorcher.  It may only be March, but the little weather-predicting farmer in me, just knew that it was going to be fantastic.

My girl was not going to school today.  She was going to scheme.  With me.
We were going on an adventure.

I let her dress herself in whatever the heck she liked.  She chose her favourite dress-up dress; lilac and sparkly and hideously ‘Little Miss’ Pageanty, blue leggings, her gold glittery welly-boots and a multi-coloured hand-knit cardigan that we usually keep for shopping trips. 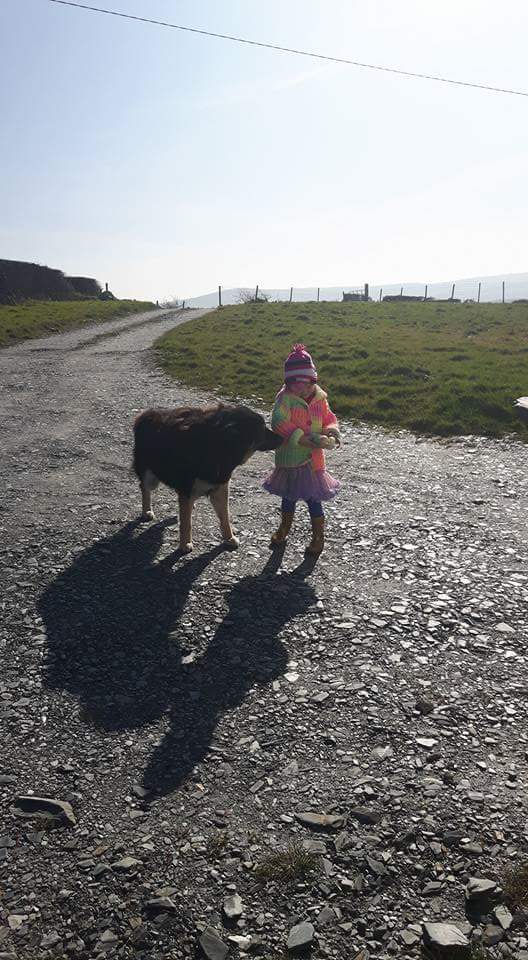 We wrapped the Princess into her pram, sloshed on some suncream and packed a “picmic” of apple juice and Gingernut biscuits.
And off we went on our adventure.

We’re blessed to live in the absolute sticks…  I mean, if you’re looking for our house, you must first find the “back arse of nowhere” and take the third left.  We’re on top of that hill past the house with the fancy stonework.  If you start going down hill again, you’ve gone too far.
Sally SatNav would need three bottles of wine to find us.

It’s Heavenly.  We live on the family farm, a full field away from where I grew up.  So today, I decided it was about time I took my girls on a trip through my childhood haunts.
We wandered only a mile down the road and back, but we went so much further than that.

We went back to the 1980’s.
Mini-Me saw the tree in the hedgerow that Mammy used to climb with my best friend Roald Dahl, which no longer has the full covering of foliage that used to hide me from my sister and brother.  (A Neighbour broke my heart when I was 14 by getting too happy with the hedge cutter.  It was never the same and my hidden reading den was destroyed.  For the record, I haven’t forgiven him yet.  I’m looking at you Mr. Bellybutton.)

We stood in the deep mud at the gate to the potato field where we used to spend a fortnight “scheming” each Harvest. (“Slave labour” some might say, but what memories we have.  I swear that there is no better taste than jam and clay sandwiches with tea in a plastic flask cup.)

We looked at the fields where we used to tie the long grass together and run through it, playing ‘Trippies’.

We found a magic stream… a newly dug drain, but humongously exciting.  it required the immediate throwing in of twigs. 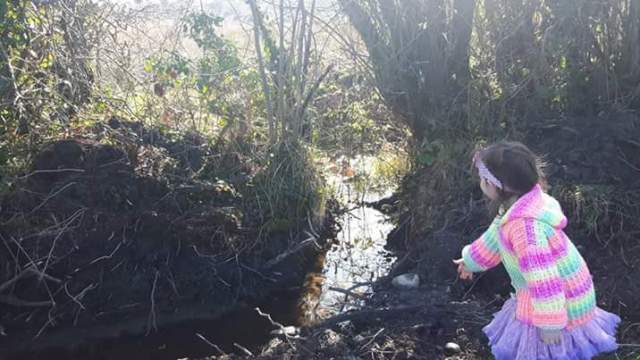 I showed her the gate the the Fairy Kingdom which lies at the border between Dad’s farm and the next.  The old gate has been lying in that spot, above a busy babbling stream, for over 30 years.  It’s rusted, ruined and utterly convincing as an enchanted gate.  It only opens for Fairies in the moonlight…of course.

We saw the enchanted tree in the middle of the neighbour’s field.  That’s where Pixie Hollow is…obviously.

We saw the “Jungles”; the messy, overgrown batch of whin bushes where my siblings and cousins and I had the most spectacular adventures as children.

And to top it off, as we munched our bickies and drank our juice, Mini-me realised that we were surrounded by glimmering fairies! (Midges…but hey!)
Oh the excitement.

When we returned home, she was buzzing from the fresh air and the fun.  I was buzzing from the nostalgia and from the realisation that while it may not be quite as safe as it was when we were children, my girls will have the same opportunities for imagination and explorations as I did.
They’ll play in fields.  They’ll get wellies stuck in mud.  They’ll have adventures in jungles of whin bushes and they’ll hide up trees with their favourite books.
And where my Mum used to sound the car horn as our signal to haul our behinds back to reality for bedtime, I’ll probably just text them to come home.  Because times have changed.

But what hasn’t changed is the fact that sometimes, you have to simply turn away from routine and convention and go have fun.
And you can’t measure, grade or assess how much a child can learn from simply going on a walk outside with Mum or Dad.

So for one day only, I was Scheme in the Sunshine Mum. (and it was awesome!) 🙂

The talented folk of the Letterkenny Musical Society take to the stage tonight for the opening night of  their production of Jesus Christ, Superstar.
I watched the dress rehearsal last night.  It’s stunning and apart from the Saturday matinee, is sold out.
Rightly so.
It’s utterly spectacular.

I’m not involved this year.
That makes me sad.

Obviously,  I have my hands pretty full with Mini Me and Princess, so the show this year was really not an option for me.
I hadn’t really missed it to be honest…until Sunday.

Hubby was in the theatre helping to build the set as usual.
I took the kids in to see what was happening and to say hi to everyone.

It was the most beautiful, sunny and crisp February Sunday.  The side door to the stage was rolled up, sunlight flooding the stage.  Lighting rigs were hoisted at head height while the crew worked on them.  The production team were creating what would be huge columns for the set.
I stood in the middle of it and closed my eyes.  The familiar voices of Hubby and the usual suspects calling instructions to each other, co-operating and working together, made me smile.  The sounds of the cordless drill…the smell of fresh wood and sawdust…the muffled conversation of the sound guys from the auditorium… it was beautiful.

I opened my eyes and looked at the chaotic scene in front of me, wondering (not for the first time in my theatre life), at how within just a few hours, this chaotic canvass would be transformed into a completely believable world into which the cast would step.
“Do you miss us?”  My thoughts were interrupted by the familiar voice of our Producer.   And for the first time, I answered that question without having to think about it or feel guilty for admitting it.
“Soooooo much.”

I’ve been asked this asked few times in conversations over the past few weeks.  As the publicity for their show caused conversations to turn to it more and more, I’ve heard “Are you involved this year?” or “Do you miss it?”   My automatic answer?  “Not at all, sure I dont have time to miss it!” (Cue careless laugh!)

More often than not however, the question has been more of a statement.  “Obviously you’re not involved this year.” or “I’m sure you don’t miss it, sure you have more important things to think about.”
One friend, meaning well when I admitted that I was missing the build-up to the show, went as far as “But sure look at what you have there.  That’s much more important than a show.” He pointed at my 3 month old Princess who was sleeping in my arms while I ate lunch (with one hand as usual!)
And of course he was right.
She and her sister are the most important thing in my world.
They are my show.
They are my production.
They are the choreographed chaos of which I’m most proud, and I’ll direct them through life with the same dedication and love that I put into the shows.

But they are also only a part of me.
Yes, I am their mummy, but I’m still me.
I’m still the drama queen that lives for the stage.
I still love the theatre.
I still get goosebumps when I hear someone hitting that note.
I still get so carried away watching my closest friends on stage, that I cry because I absolutely believe the pain they are conveying.

My girls will grow up in rehearsals for shows.
They’ll see the stress and work and time and effort that goes into this “hobby”.
They’ll learn confidence, respect, organisation skills.
They’ll experience the fruits of the long months of hard work, and they’ll learn that if you want something to happen, you must work to make it happen.
They might even perform on stage with me at some point.
Maybe they’ll hate it all.  That’s OK too.

But if I can’t continue up to be who I’ve always been, just because I’ve been blessed with two little darlings, I’m not doing anyone any favours.

So this week, I’ll pull up my big girl pants and enjoy watching the people I love so much enjoying their success.
I’ll  cheer them on and encourage them to believe that they are indeed fabulous.
On Saturday night,  I’ll sit in the audience and I’ll clap and cheer and celebrate their achievements.
Because they are Superstars.

And whether I’m on the stage, or in the audience,
I AM Still Stage Mum.