You all know her.
The dolly who is a COMPLETE skivvy to everyone in her house and who gets a chance to go to the ball,  but has NO hope of going because of her fecking  To-do list and the constant pile of laundrey and sewing and cleaning and crap that grows and grows and grows, until her Fairy Godmother appears and BibbityBobbetyBoos her ass all the way to the ball.
Cinderella.
Well. Let me introduce you to the modern age Cinderella…

MAMMARELLA.
The modern generation of Queens who sometimes get a chance to go to a fancy ball, but who wonder HOW THE HELL it’s going to happen because of the same reasons as Cinderella…being general skivvies, having to organise EVERYONE else in the house beforehand, and fecking  to-do lists that would knock poor Cinders off her glass slippers.
On Monday, knowing that we had a super busy week ahead, but happy that it was going to end at a wonderfully glamorous affair, I took a breath and it was all systems go!
THIS Mammarella however,  ain’t got no Fairy Godmother and so rather than being magically BibbityBobbetyBood from a pumpkin to a Princess, I had to cram a combination of grooming appointments and general maintenance, like you know, showering etc…into my already STUPID schedule.
Do it I did,  with the help of my own fairies, and I EVEN managed to get my arse mahogonised in a spray booth.
On Friday morning at 6am, I WAS Cindafuckinrella. 😂 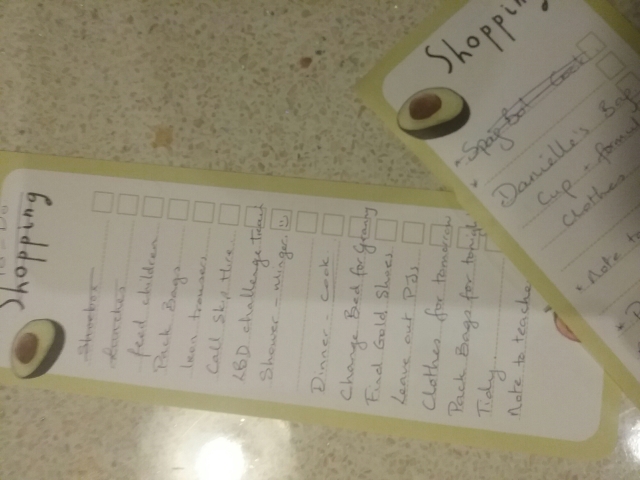 My To-do list was RIDICULOUS, because as well as making myself appear at the ball looking ALIVE, never mind FABLIS, I ALSO had to sort the minions, make a bed for the Granny, go to my JOB, fit in two meetings cook dinner for everyone else, write out baby routines, and keep everyone alive, pack bags and get to the hairdresser by 5pm….
The day was a whirlwind.

But we got there.

I put lines through that To-do list like an ugly sister on rollerblades.
And when I FINALLY got to the hairdresser, she used magic potions and lotions and turned me from sweaty, dishevelled, skivvy into a slightly #glammymammy.
I got to the hotel, after being stuck in the most hilarious traffic ever, with ten minutes to spare, titsickle-taped myself into the dress and I was finally ready to go be a Princess.
And The Him??
How did HE transform himself from a gym-gear wearing servantboy into a Handsome Prince?
He left work, took a shower, stuck on a tux that someone HANDED to him in a bag, and Bibbity Bobbity Boo! Turns into James Fecking Bond… 😲😲😂

But then he won and after all, he WAS the reason I got to pretend to be a Princess for a night wasn’t he?
Actually, Princess my arse… this Mamma Bear was a Queen for the evening.

Cinderella doesn’t have a CLUE! 😂😂😂
Wait until she has 2 minions and a Him to get out the door! 😙