Today is Memory Monday.
I had a savage blast from the past this week Ladybelles.  💗

On my Instafeed, there popped up a beautiful photograph of a friend’s beautiful wee babby.
Nothing unusual there?
But I felt like a truck had hit me.

Why?
Because the perfect little one was wearing a hip harness and suddenly I was back 5 and a half years, remembering things that I haven’t thought about in, well, 5 and a half years.
Mini-Me wore the same little hip harness for 9 weeks.  Her hip dysplasia was diagnosed when she was just 24 hours old.  A student doctor spotted it, and within a few hours, she’d been fitted into the contraption that would (and thankfully did) fix her little hips.
She’d been breach from 28 weeks in my womb and was born by C-Section, folded in half with her left leg up against her left ear. Her wee ear was bent forward, that’s how crushed over she’d been!  (I remember laughing because the Furbaby came to us with a floppy left ear too.  The things that go through your head eh? 😂😂)
But anyway, in the space of a 10 minute examination, everything changed.  Now, in hindsight, we know we were soooooo lucky.
We were lucky that the student Doctor had been invited to check her. The Doctor had missed it.  We were lucky that the hospital had one of the little harnesses in stock, so she didn’t have to wait in pain.  We were lucky in that she responded well and after 9 weeks, we got the bad old harness off.  We were lucky as no surgery was required, and apart from a little phase of physio until she was 2, no follow up action was required.  She didn’t walk until she was 20 months.  In hindsight, I should have enjoyed that!  Princess has been CLIMBING since 11 months and I’m feckin exhausted! 😂😂
It’s not a big deal.  There are a million other things that we could have been told.  There are a million parents who would tut at something as insignificant as hip dysplasia.  In the scheme of things, it’s not the worst thing that will happen.  And yet, when I saw this photograph, I was over run by emotions and memories that as I spoke to The Him, I realised that I have pushed to the back of my brain.
And like everything to do with parenting, when it happens to your baby, to you, regardless of how seemingly small the issue is, it’s still your issue and it’s still horrible to deal with.
I was sitting there with my seemingly perfect little girl. and then we were the parents who had to learn how to hold her. Who had to deal with not being able to bathe her ourselves.  Who had to explain why she looked like a wee starfish (so cute).  Who got sympathetic looks from people when we were out and about.
None of the clothes she got could go on her.  She didn’t FIT into the car seat we’d bought for her.  When she had a poonami, she couldn’t be washed properly.  Her skin was chaffed and raw where the harness rubbed constantly.  She was restrained, just when she should have been free to kick and feel.
Of course, we figured out ways to deal with all of these little problems quickly.  The staff in LUH were fantastic. The moment the Doctor pulled her wee legs back and strapped them into the harness, she let a huge sigh out of her and fell asleep instantly.  She slept for 6 hours straight.  She had been in so much pain up until then.  Every time I had changed her nappy, I had wondered why she was screaming.  Then I suddenly knew and ironically, it was that realisation of her pain that softened the blow for us. So we did what all parents do.  We pulled ourselves together and got on with it and where we couldn’t shower her with water, we showered her with kisses.  😘😘 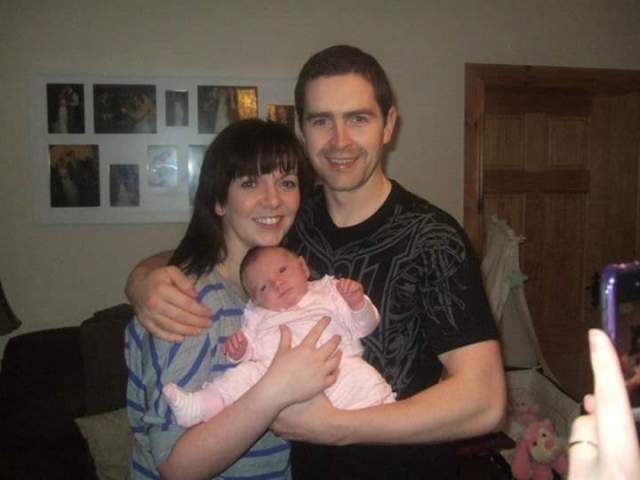 Yes it was horrid.  Of course it was hard, as a first time Mammy especially, to suddenly have everything change.  My expectations shifted.  My visions of nightly bath routines and pretty outfits went quickly out the window, but we got on with it.
And in hindsight, it wasn’t that big of a deal.

Except that it obviously was more upsetting for me than I gave myself credit for.  The photograph brought back so many memories, good and bad.  It got us talking about our little Mini-Me and those few weeks.
And it made me wonder why I’ve never thought about it?  Why I’ve never thought to write about it?  Why have I put it all so far away into my mind?  I have no idea.  I was so relieved the day that the consultant took the harness off her.  And once the physio told us that she was developing just fine, slowly but fine, I cried with joy.
The day that I saw the photograph of my lovely friend’s little starfish, My Mini-Me had won the sack race in the school sport’s day and was on stage dancing that night.  And so my memory flashes were short-lived and my next reaction was that I needed to tell my friend that it will all be worth it.  That it’s a good thing that it was detected early.  That it’ll be off before she knows it.  I told her the little tricks that we found, like using emulsifying ointment and light bandages to stop the skin chaffing. Like putting light tights for age 3-4 over her wee legs and how she can still put on pretty dresses.
But most importantly, that it’s completely fine that she’s finding it difficult to deal with or to feel upset, because there is no Blue Peter Badge for brave Mammies and Daddies and sometimes, shit things happen.😳
But thankfully, in our case anyway, things were and are fine. (Look at how cute our little Starfish was!  It was actually hard to get used to needing 2 hands to hold her after the harness came off!)  She is sine and my friend’s little one will be too
So there we go.  Have to be serious sometimes you know!?.
Has anyone else dealt with hip dysplasia?  Do you have any tips or advice that you’d like to share below for my friend or any other Mama who might be dealing with it right now? Please share or PM me if you’d rather not be identified.
Hope you all had a lovely day. 💙💙💙💙
xxxxxxxxxxxxxxxx