Symbols are simple.  The reason we use symbols is to avoid misunderstanding. They transcend languages and general capabilities, allowing for easy communication.  Universally, red means stop and green means go.  We know which toilet to use because of the shape of the symbol on the door.  We can understand symbols on road signs, on advertisements, on everything.  But there is a verrrrrry special breed of person who has great difficulty in understanding a certain symbol…the parent and baby parking symbol. 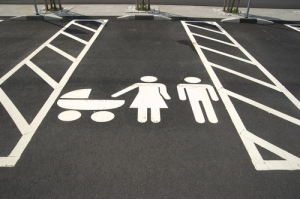 This one seems to cause great confusion.

Yesterday, I witnessed a seemingly fit and healthy 20-something male, bounce from his car and pop into a local supermarket.  There were plenty parking spaces in the massive car park.  The weather was perfect for a little amble from car to shop door.

He had absolutely no sign of child in his well kept VW Golf and he wasn’t pregnant, as far as I could tell anyway.  And yet, he felt the need to park in the space.

Now, maybe he wasn’t taught symbolism very well in school.  Or, maybe he was taught it too well by one of those wonderfully talented teachers who taught him how to see hidden meaning and to think outside the box.  In  this case, the box is the very clearly lined parking space, and his metaphorical musings probably allowed him to interpret the blatant symbol as “a space for people who hope to one day have sex and make a baby in the future, so save your energy for the action and don’t walk unless you have to.”

Or maybe, he’s just a plank.

Either way, I followed him, tutting disapproval and shaking my head.  He saw me.  He carried on, probably wondering why the crazy lady was glowering at him. I was angry. I was furious and I was quite happy to let him know it.

He upped his speed and moved away from my disapproving glares as fast as his non swollen ankles could carry him. And I carried on into the shop, getting over the episode by the time I reached the meat section.

Then, I returned to my car.  Non-pregnant man’s car was still in the parking space. Another car had just parked in the one beside it and out popped a middle aged lady and probably her daughter.  Now, granted these spaces are reserved for Parent and Child, but when your child is in her late teens, you’re taking it a bit too far!

As I reached my own car, I saw a young mum.  Younger than me.  She had a  toddler hanging onto her leg as she tried to get her young baby out of its car-seat.  She was flustered.  She was soothing baby and agreeing with toddler, all in one breath.  She was trying to balance children and handbag. And she was a good 500 yards from the trolley bay.  I finished putting my groceries into my boot and pushed my trolley towards her.

She paused,  looked at me and then at the trolley, and the relief washed over her face as she realized that this would instantly make her life a whole lot easier.

“Of course I am.  Here, take it.  It’ll save me walking back over with it anyway!” I sang.

“Hang on til I get you the euro” – cue panic to find the zip of the handbag and frantic rummaging for the purse.

She stopped in her tracks.

“Oh my God, you’re so kind!” she said, almost as a question. She seemed pretty baffled, maybe even suspicious. What kind of crazy lady would just give her a trolley, with no catch? One who’s been there.  That’s who.

“Thank you” she said, as toddler settled into the trolley, shouting “Push Mammeeeeee, puuuuush!”

“You’re welcome! See ya” I smiled back.

I got into my car, feeling all good and nice.  Being nice is nice.  It feels nice.  It costs nothing…well, OK, in this case €1. But to that Supermum, it was worth a whole lot more than that.

And Karma works in mysterious ways.  To Mr. NOT PREGNANT and to all the other metaphorical symbol interpreters who see those parking spots as free for all, Karma is always watching. I hope that when it bites you on the ass, it leaves a big red bite-mark.

So I was Seething-mum; seething that some people can be so inconsiderate and so self-involved.  But afterwards, I was also Smug-mum.  Because I chose to be nice and that’s enough for me.