​Tonight’s story choice was Tangled or Beauty and the Beast.
Tangled is too scary apparently…

“Because Eugene cuts her hair!”  (Silly Mammy.)
Yes Darling because the huge, giant, fanged, bad tempered MONSTER and mysoginistic arsehole male protaganist in Bootay and the Beast is nothing compared to having your hair cut.

Her nightmare tonight had BETTER be about a huge fricken scissors rather than the Beast.😂
We’re going through a nightmare phase, which means that she ends up between us at approximately 2am and no one gets anymore sleep until 5am when Him’s alarm clock evacuates Him from the bed and she decides to slumber with her heel in my back.

It’s a pain in the posterier.

If she’d snuggle up and go to sleep between us, it’d be tolerable, but NO.

Mini-Me lies there with the eyes of a frightened BLUEBOTTLE staring at the ceiling and jumping dramatically each time there is a sound.

And I would NEVER blame The Him👤…

(Pointing out that he let her watch “The Avengers” last Saturday doesn’t count as directing blame.  I’m simply stating a random fact that just happens to coincide with the start of her nightmares. Im not BLAMING anyone…) 😲😲😲
Today, I am a DOMESTIC GODDESS People!
I’m talking Super-fricken-Mum. 😂
I attacked the laundry and made it to round 2 before giving it the fingers and closing the utility room door once again. 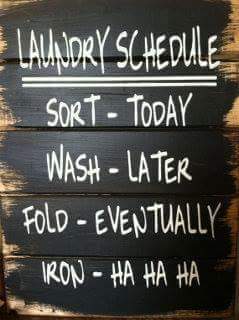 The girls were fed AND BATHED today.😅

The minions are now safe and snug in bed, the bombsite is tidied again and the dinner is on. 💃💃
I am fricken fablis and I don’t even want gin tonight!

That’s how much my shit is together tonight Ladybelles.
Or maybe it’s because I’m watching the muscly gymnasts on the Tellybox and they’re making me want to worship my body like the shrine that it is and the possible Olympic winning gymnast that it could be in 4 years time…

I could you know!

My one and only attempt at “the Horse” or vaulty thing as an 8 year old child with seriously BAD EYESIGHT resulted in a black eye, delivered beautifully by my own knee…so maybe not gymnastics.
Synchronised swimming?  Can’t swim…

Diving? Afraid of heights…
Ah I’ll find something to be fablis at.
Maybe being a Mammy should be an Olympic sport?

Those muscles… the bums… siiiiiigh! 💖
Hope you all had a Marvellous Mumday! 😙😙😙