Oh joy, oh rapture!
It is Friday; the Friday where the significance of Fridays becomes significantly more significant to those of us who have been #soblessed to have the summer off with our minions. And whether it has been a summer of #pottering and #makingmemories and all of that other instaperfect frankittywank that some love to spout over news feeds, or indeed a summer of #fml and #aretheschoolsopenagain, it is now all but over.
And so the significance of routine must be acknowledged and what better way to begin, that to return to Freezerful-Friday dinners and Fricken-shut-up-and-pours.
My cleaning and organising was disrupted on too many occasions by demands for jigsaws and poos and general “GivemeattentionNOWs” and so while the washing is done, there was no bleaching and even less cleaning done.
My favourite interruption however, was this one. I had foolishly said no to an icepop before her healthy and nutritious dinner of svelty flattened organical sourdoughed bread, adorned with sunkissed blushing tomatoes, elderflower cheese with emmenthol (great for flus) and thinly sliced prosciutto, gilded with the glitter of a fairy’s dandruff… yes. Pizza.
I returned the box of rockets to the freezer and inthe 0.43 seconds I had my back turned, Princess Demonica had turned all 6th Sense on me and opened all the doors in protest. 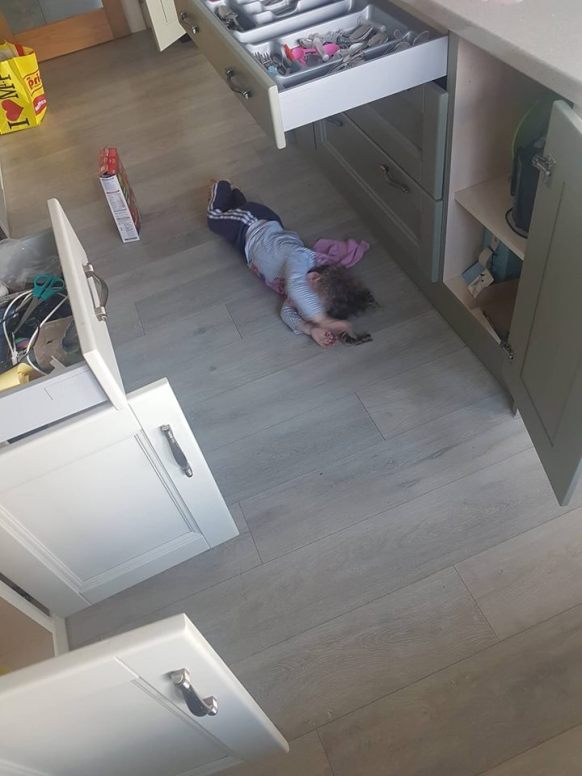 Funny, when I was expecting her, I loved the name Damien for a boy… May have been appropriate enough.
The Hellfiend was so speedy in her task that I’m not beyond being convinced that she sprouted 12 other arms or had the help of a few spirits, just to ensure three things:
1. To remind Mammy, with dramatic effect, what new levels of tantrum she is capable of.
2. To convince Mammy to call upon her own spirits tonight. It is a Friday for gin. Grapes shall not cut it.
3. To confirm Mammy’s suspicions that it is probably high time that my dysfunctional little fambam did in fact get back into routine.
They do say we learn from our children, don’t they?
So Yay to Fricken Fridays and cheers to those of you whose little demons have tried every last significant ounce of your patience today.
Cheers Mammies.
Remember that if you like my Smumblings, you still have an hour or two to vote for me to reach the final of Maternity & Infant Awards for Best Parenting Blogger.